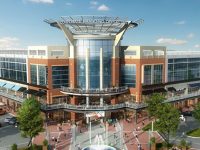 Lincoln Harris Brokers Five Leases at the Arboretum at Weston in Cary April 28, 2016