Tallahassee, Fla. — Governors Crossing’s other tenants include Panera Bread, BB&T and others.

Tallahassee, Fla.  — Deerfield Beach, Fla.-based Konover South, LLC, has closed the $8.5 million sale of its 65,523-square-foot Governors Crossing shopping center in Tallahassee, Fla., to Publix Super Markets, Inc. In addition to the existing 45,600-square-foot Publix and 1,100-square-foot Publix Liquors, tenants include BB&T, Panera Bread, Supercuts and others. Not included is a 7,000-square-foot Kangaroo Convenience & Gas located on an adjacent corner. No brokers were involved in the transaction. Last November, David Coppa, Konover South’s CEO, said Konover South had bought back an 883,926-square-foot Florida retail portfolio valued at more than $100 million, from an institutional partner, and funded with internal capital. Governors Crossing was among the nine prime core-plus and value-add retail properties. “Konover South will continue to hold its portfolio assets, though a few will be divested strategically,” Coppa says. “Konover South has the capital and capacity to perform strategic acquisitions, and with rental rates and leasing activity on the rise, we are aggressively pursuing other deals.” The Konover organization has developed or acquired more than 150 shopping centers totaling 15 million square feet. 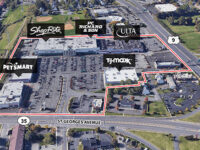 Adelaide Polsinelli Senior Director, Eastern Consolidated With the growth of online shopping, retailers must portray shopping as an enjoyable experience in order to compete.

Houston  — This will be the first Whole Foods north of I-10.

Brooklyn, N.Y. – The smaller-footprint urban Target concept will open at the 1.9 million-square-foot mixed-use center in 2016.

Surprise, Ariz. – The center was 98 percent leased at the time of sale.