Beaverton, Ore. — Nike Inc. (NYSE: NKE), the Beaverton-based footwear giant, has reported its revenues were $10.6 billion for its 2021 fiscal first quarter, which ended Aug. 31. The revenue represents a decrease of 1 percent from the same period in 2019, with its direct sales at $3.7 billion, up 12 percent, and Nike Brand digital sales swelling by 82 percent.

According to the company, its first-quarter revenue performance was impacted by strong Nike Brand digital growth, offset by lower revenue in its wholesale business and Nike-owned stores. Nearly all of the Nike-owned physical stores were open during the quarter.

Despite the open stores, Nike experienced year-over-year declines in physical retail traffic across the marketplace due to COVID-19 impacts and safety-related measures.

Nike’s selling and administrative expenses decreased 11 percent to $3 billion, with demand creation expense down 33 percent at $677 million primarily due to lower marketing spend as many live sporting events were postponed or cancelled. Additionally, operating overhead expense decreased 1 percent to $2.3 billion as lower travel and related expenses were slightly offset by restructuring costs and continued investment in digital capabilities, both of which are part of the brand’s Consumer Direct Acceleration program.

Inventories for Nike were $6.7 billion, up 15 percent compared to the prior year period, and down 9 percent from the previous quarter as the company continues to strategically manage excess inventory from store closures and lower wholesale shipments globally during the fourth quarter of fiscal year 2020. 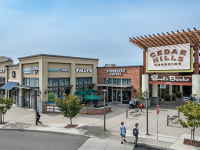 Indianapolis — Simon Property Group (NYSE: SPG) has released plans for reopening several of its malls in the first half of May. The openings are based on current state and/or local stay-at-home orders put in place as a result of

Reports: Neiman Marcus to Furlough Most Workers Amid Coronavirus Crisis

Dallas — Dallas-based luxury retailer Neiman Marcus will furlough the majority of its 14,000 employees as it endures another month of store closures, according to reports from multiple news outlets including Reuters, Bloomberg and The Dallas Morning News. Neiman Marcus CEO Geoffroy van

Despite Third-Quarter Losses, Walgreens to Invest $1 Billion to Open Doctors’ Offices at US Stores

Deerfield, Ill. — In its fiscal 2020 third-quarter results, Walgreens Boots Alliance Inc. said its performance was “significantly impacted by the COVID-19 pandemic,” causing sales to be roughly $700 million to $750 million lower. The decline is largely attributed to

AMC Theatres Expects to be ‘Fully Open’ Globally in July

New York City — The International Council of Shopping Centers (ICSC) has requested financial support from the federal government to guarantee or directly pay for business interruption coverage for retailers, restaurants, other tenants and landlords as a result of the