The Irvine Company’s iconic Fashion Island has added more than 40 new tenants and expanded to enhance its retail oasis.

The center that keeps reinventing itself has done so again. The Irvine Company’s Fashion Island — one of the country’s first regional centers — has had more than 40 new retailers join in the past 3 years. In addition, the center has gone through a major renovation — the fourth in its history — and has added Nordstrom to its collection of strong performing anchors. This year will see the addition of Whole Foods, which is currently building out a 50,000-square-foot store at the center.

Opened in 1967, Fashion Island serves as the hub of the Irvine Company’s master planned area of Newport Beach, California. Due to the immediate trade area’s strong demographics, the 1.4 million-square-foot center has always been one of the strongest performing in the nation, and that has enabled it to attract the strongest tenants in any market. The past few years have been no exception, says Collings.

“We’ve had a great resurgence in tenant interest since January 2010,” he says. “We have brought in approximately 40 new stores. We have about 125 retail spaces at Fashion Island, so we have made a significant dent in our merchandising mix.”

The Irvine Company has always strived to find the best retailers that it can for Fashion Island.

“We search street retail around the globe and we look for emerging brands or those who are new or first to the market,” says Collings. “That is our calling card.”

As an example, one of the retailers recently joining Fashion Island is Ella Moss. The apparel brand had just done wholesale to retailers until opening its first store in the world at Fashion Island in 2011. Fashion Island was also home to the first West Coast location for Elie Tahari and Vineyard Vines. It is under construction with the first West Coast stores for C. Wonder and Joie. The center was home to the second Splendid, Brandy Melville and Athleta stores in their chains, and the second Jonathan Adler store in California. Vince opened its second store on the West Coast at the center.

“Our posture has been to get the top retailers that you typically wouldn’t find in a traditional regional shopping center,” says Collings.

Fashion Island underwent a $100 million renovation that started in 2009. Part of the renovation was the addition of Orange County’s sixth Nordstrom store, which opened in Spring 2011. The 138,000-square-foot store has become a top performing store that has added to Nordstrom’s strong business in the region, according to the Irvine Company. Other anchors at the center include Macy’s, Bloomingdale’s and Neiman-Marcus. A number of restaurant spaces were also added. Another aspect of the renovation was the relocation and expansion of Apple’s store at the center. Opened in September 2011, the Apple store at Fashion Island is the retailer’s largest in Orange County. It contains a conference/meeting room — overlooking the Pacific Ocean — where it can bring larger clients for training and other meetings. Another major aspect of Fashion Island’s makeover was the renovation of the center’s food court from top to bottom. It brought in many familiar names. The Irvine Company also rebuilt Fashion Island’s cinema. The center previously had a seven-screen theater with 1,700 seats. It gutted the theater and rebuilt it with stadium seating, digital sound and projection, a new concession area and new luxury seating. The new Island Cinema, operated by Regal Cinemas, has 700 seats; about 100 per screen. Moviegoers are able to choose seats on-line, and enjoy cocktails at their seats. The theater opened in December 2011.

“The new theater has been a huge homerun for us,” says Collings.

Fashion Island added a Nordstrom in response to demand in the area.

The theater, and the 40 other new tenants that are either open or in the process of opening at the center, along with the renovation, are creating what the Irvine Company has termed as Fashion Island’s “second renaissance.”

“With the renovation going on, we made the decision to trade out leases that were expiring that we had elected not to renew,” says Collings. “In some cases, we made some changes with retailers that were here who were not performing.”

Fashion Island when the center was first opened in 1967.In its 45-year history, Fashion Island’s vacancy has never gone below 93 percent. Today, the center is 98 percent occupied. Even though Fashion Island has five department store anchors, the Irvine Company has always said that the center has six true anchors.

“Our sixth anchor is the Pacific Ocean,” says Collings. “We are one of the only shopping centers in the country that has an amazing view of the Pacific Ocean. We’re sitting in the heart of one of the best demographics in the United States. Newport Beach is consistently one of the wealthiest communities in the country. For retailers who don’t want the traditional enclosed mall setting, Fashion Island is a great choice for them.”

Over its history, Fashion Island has grown with Orange County. Originally opened with Buffum’s and Broadway-Hale as anchors, Neiman-Marcus joined the center in 1978. The Atrium Court, which houses the food court and other retailers today, was added in 1985. The center underwent a major renovation in 1989, with further expansion and minor renovations in the mid-1990s, 2002 and 2006. Over its history, Fashion Island has become a city center for Newport Beach. Fashion Island is the focal point for the Irvine Company’s Newport Center, which is encircled by office buildings and two luxury hotels. In Newport Center, a new city hall for Newport Beach is under construction; the police department and fire department are already located there. The main city library is also located within Newport Center. That center of attention is what attracted Whole Foods to Fashion Island.

“It made sense to us to complete the center with a grocery component that will make Fashion Island the true city center of the Newport Beach area,” says Collings.

Whole Foods will open in October. It is anticipated to be a showcase store, much similar to the retailer’s location at The District at Tustin Legacy about 7 miles away. The store will be located in a new building at Fashion Island, which also hold Dick’s Sporting Goods on a lower level. As this build out completes, Bloomingdale’s will launch an exterior renovation of its popular store at Fashion Island.

Since Irvine Company owns the majority of retail nearby, it is careful about its tenant mix at Fashion Island and its 40 other retail properties. The company has three regional centers: Fashion Island, Irvine Spectrum Center and The Market Place.

“Each of the three has its own distinct personality with its own niche in the market,” says Collings.

The company’s other centers are predominantly grocery- and drugstore-anchored centers serving the residential communities that the Irvine Company has master planned. Its Corona del Mar Plaza and Crystal Cove centers have strong lifestyle components.

“We are able to spread the wealth some,” says Collings. “We have to mix the centers with where the retailers will do the best sales.”

Collings points to White House | Black Market, which is at Corona del Mar Plaza. The tenant has outstanding sales. At Crystal Cove, about 4 miles from Fashion Island, Gap and Banana Republic are tenants with an extremely successful Trader Joe’s.

The inspiration for Fashion Island’s transformation came from the Irvine Company’s completion of its Resort at Pelican Hill. About 30 percent of the 14 million visitors who shop at Fashion Island every year are tourists. 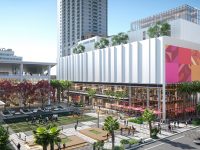 Pulling Space Out of a Hat

Andy Misiaveg The Shopping Center Group How to create space in submarkets and shopping centers by reshaping the landscape of today’s properties.

Seattle — The companies have entered into a merger agreement for $620 million.

Aston, Pa. – Chestnut and Benbrooke plan to use the vacant Dutton Mill Shopping Center to redevelop and market the shopping center to national and regional retailers.