Atlanta — Phase I of the development will open in spring 2017, coinciding with the stadium’s debut on Opening Day in 2017.

The Atlanta Braves have announced Wakefield Beasley & Associates as the lead designer of its mixed-used development in Cobb County, Georgia. The Atlanta-based architectural design firm has designed mixed-use developments throughout the Southeast, including The Forum in Norcross, Georgia, Town Center at Atlantic Station and Avalon in Alpharetta, Georgia. Four newly released conceptual renderings of the mixed-use development surrounding SunTrust Park provide additional architectural detail, highlight the massing of proposed buildings, showcase the interaction of SunTrust Park and various elements of the mixed-use project. Phase I of the development will open in spring 2017, coinciding with the stadium’s debut on Opening Day in 2017. A mix of hardscapes and green spaces are integrated throughout the project. The main plaza that connects SunTrust Park with the rest of the community is designed for public gatherings, including pre- and post-game programming on game days along with non-game day special events and activities. Pope & Land Enterprises, Fuqua Development and Pollack Shores Real Estate Group will develop 630,000 square feet of Class A office space, 500,000 square feet of retail, 450 hotel rooms and 500 residences. 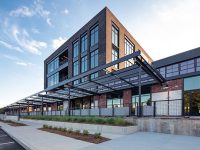 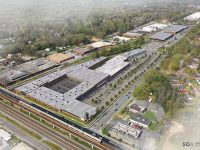 Related Cos., LargaVista Cos. Break Ground on Mixed-Use Development in Lower Manhattan