SoulCycle will open its first Atlanta location at the center in late April and healthy food concept Flower Child will open its first location in the city in mid-summer. West Elm will also open a new location at the center this summer. The new tenants join recent additions to Shops Around Lenox including Draper James, which opened in November 2017, Blo Blow Dry Bar, which opened in 2016 and Kendra Scott, which opened in 2014. Additional tenants at the center include South Moon Under, Crate & Barrel, Paper Source lululemon, Suit Supply, fab’rik and Seven Lamps. Retail consultant Tisha Maley and JLL were retained to update and manage the new tenant lineup. Originally constructed in 1979, Shops Around Lenox was updated in 2009 with refreshed facades, new community gathering spaces and new artwork. The center is located within walking distance to more than 10 million square feet of office space, seven hotels and Lenox Square, an enclosed regional mall. 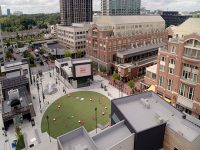 Atlanta — Phase II of Avalon will encompass an additional 80,000 square feet of retail.

Oxford, Ala. — JLL has arranged the sale of Oxford Exchange, a 333,975-square-foot shopping center in Oxford.

Atlanta — CBRE has arranged the $12.3 million sale of Shops at Cascade & Fairburn, a 45,279-square-foot shopping center in Atlanta.

Johnny Was to Open Location in Atlanta

Atlanta – The retail store will feature a mix of antique textiles, industrial collectibles and handcrafted furniture.