Baltimore — The first phase of Weller Development’s Port Covington, a 235-acre mixed-use redevelopment project in south Baltimore, kicked off with a ceremonial groundbreaking Monday, May 13. The Baltimore Business Journal reports that this phase of construction, dubbed Chapter 1, will cost $600 million to complete and span five buildings.

Weller Development, a privately held developer based in Baltimore, is the project’s lead developer and will build Chapter 1 over several years, with the first new buildings set to be delivered in fall 2021. Known as Rye Street Market, this portion of Chapter 1 will feature a 13,000-square-foot open-air market and food hall, 50,000 square feet of ground-level retail, a 12,000-square-foot meeting facility and a 15,000-square-foot rooftop event space. Rye Street Market will span four buildings totaling 275,000 square feet.

“The Port Covington of today is a completely different place than what it was just a few short years ago, and we are just getting started,” said Marc Weller, founding partner of Weller Development, during the event yesterday.

“Today’s groundbreaking is about more than just this one development or one community,” said Baltimore Mayor Benard C. “Jack” Young. “It is symbolic of what’s in store for Baltimore’s economic future: more momentum, more jobs, more opportunity for our residents and our local workforce.”

The $5 billion Port Covington project is a public-private partnership that will feature 2.5 miles of restored waterfront on the Patapsco River, as well as 40 acres of park and green space. At completion, the project is expected to span 18 million square feet and house the world headquarters of Under Armour, as well as office headquarters for The Baltimore Sun and several cybertech firms.

Apparel brand Under Armour owns 58 acres of land within Port Covington, and the rest is jointly owned by Under Armour-backed Plank Industries and Goldman Sachs Urban Investment Group, which committed $233 million of equity in the project in 2017.

“As lieutenant governor, and as a Marylander, it is truly wonderful to see how the Port Covington development has grown and progressed over time,” said Maryland Lt. Governor Boyd Rutherford during the ceremony. “As a public/private partnership, this community serves as an excellent example of what can be accomplished when the public and private sectors work together.” 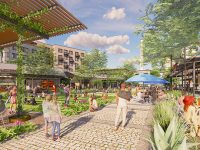