Leawood, Kan. — AMC Entertainment Holdings Inc. (NYSE: AMC) says it has “substantial doubt” for its ability to remain in business after shutdowns due to the coronavirus. If the movie theater chain is not able to recommence operations within its estimated timeline, it will require additional capital. The Leawood-based company temporarily suspended operations at all of its theaters through June and is generating no revenue. Even if governmental operating restrictions are lifted in certain jurisdictions, AMC says distributors may delay the release of new films until operating restrictions are eased more broadly both domestically and internationally.

AMC today released preliminary results from its first quarter that ended March 31. Total revenues for the three months amounted to $941.5 million, compared with $1.2 billion the same time period last year. Net loss for the first quarter is projected between $2.1 billion and $2.4 billion. Net loss for the same time period in 2019 was $130.2 million. As of April 30, AMC had a cash balance of $718.3 million. Second-quarter results are projected to be worse. 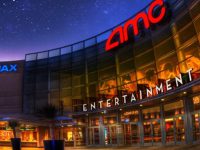