Bentonville, Ark. — Bentonville, Arkansas-based Walmart Inc. (NYSE: WMT) has seen an increase in revenue during its fiscal second quarter of 2021, which ended on July 31. Walmart’s total revenue was $141 billion, an increase of 2.4 percent year-over-year.

According to Refinitiv, the discount retailer’s earnings per share was $1.78 adjusted, while it was expected to be $1.57, and the company’s revenue was $141.05 billion, higher than the $137.17 billion expected. The retailer revised its 2021 forecast and is now predicting its earnings per share to range from $6.20 to $6.35.

Walmart’s net income declined to $4.28 billion from what it was a year prior at $6.48 billion.

Walmart reported an increase in its grocery sales with 6.1 percent of revenue from groceries. The company’s food sales grew $2.4 billion more than a year ago, which CNBC attributes to customers being attracted to the cheaper food prices at Walmart.

CNBC also reports that grocery sales and e-commerce has slowed compared to when the pandemic first started and everyone was rushing to buy enough food, toilet paper and other essentials. However, the news outlet also reports Walmart’s same-store sales increased by 5.2 percent, which was more than the 3.3 percent predicted by analysts in a StreetAccount survey. These numbers were lower than the 9.3 percent same-store sales the retailer saw in the same quarter last year.

Brett Biggs, the chief financial officer of Walmart, attributed the rise in sales to customers buying items such as suitcases, party supplies and clothing, according to CNBC. 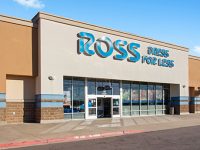