It may not be the most expensive retail city in the world – this year – but New York City remains the most vibrant and constantly evolving city anywhere. Boosted by new development, a booming stock market and record-setting tourism numbers (55 million visitors), we’ve seen a near-constant influx of new names, new stores and new concepts throughout the city. From luxury designers seeking that flagship space on Madison Avenue to established brands testing new concepts, to e-tailers turning into retailers, New York is a constantly evolving retail scene.

But what could seem like chaotic turnover actually is anything but. The newcomers seem to follow a number of interesting patterns, including common areas of origin and trendy categories.

For the past few years, retailers entering the city seem to come in geographic waves. Several years ago, we had a second British invasion, except instead of the Beatles and the Stones, we had TopShop, AllSaints, Stella McCartney and Kurt Geiger. This was quickly followed by a French revolution, with Zadig & Voltaire, Maje, Sandro, La Civette and IRO. Most recently, we’ve seen a plethora of names from Scandinavia, including Moods of Norway, Ivana Helsinki, Acne, Happy Socks and Han Kjobenhavn.

So who’s the next welcome invader? Australia’s retailers certainly seem to be making a run here. Aesop, a natural skincare and cosmetics line, has rapidly opened several units in the city. Swimwear designer Zimmerman, which opened its U.S. flagship in 2012, already has moved to a larger location. More recently, Sass & Bide, a women’s apparel line, has come to Soho, and bridal designer Karen Willis Holmes to downtown. Multiple brands from down under are available at boutiques Damsel in Distress and B Space. Word has it that other brands are coming, including Rodd & Gunn’s menswear.

That’s not to say that we still don’t have other European and even Asian retailers coming here. Joseph, an exceptional London apparel boutique, is adopting the new luxury pattern of opening stores on both Madison Avenue and in Soho. France will again be represented by The Kooples, an apparel line from the sons of the founders of Comptoir des Cotonniers, which will debut on West 14th Street in Meatpacking, and by Roland Mouret, with fine fashion on Madison Avenue. Italian brand WP Lavori will make its U.S. debut in Cobble Hill, Brooklyn, a borough quickly becoming Soho East.

Beauty continues to be a focus, not surprising in one of the most style-conscious cities in the world. Joining such newcomers as OroGold is DeSheli, a high-end Israeli retailer/spa that sells by appointment, and after a long consultation with a specialist. Annick Goutal’s fragrances are joining the beauty wars on Bleecker Street, and Rituals, a Dutch beauty store, has come to the United States on the Upper West Side and in Soho. Rouge NYC, from Law & Order makeup chief Rebecca Perkins and star Stephanie March, makes a full makeup artist salon available to all in Soho. The last is a logical follow-up to our other major beauty trend, blow-dry bars, which continue to expand around the city, albeit with a few shakeouts. We’re going from retailers to service providers to help the ever-busy New York professional.

Not all growth is about women, however. We continue to see more men’s designers taking shops around town. Newcomers include designer Robert Graham (also with a smattering of women’s apparel) opening a store in Greenwich Village, Original Penguin and Ernest Thompson coming to Soho, and John Varvatos to Madison Avenue. Any of these designers could eventually expand to other major city shopping streets, and eventually to A++ malls around the country.

Existing retailers, meanwhile, are extending their brands, and in some cases, their stores. H&M is bringing its sister label COS to 129 Spring Street in Soho and its other, more chic brand & Other Stories to 575 Broadway in Soho by the end of the year. What’s really interesting about this deal is that it puts the newcomer next door to Prada, the designer many cite as kicking off the luxe-ification of the entire neighborhood. (Also significant here is that Prada recently renewed its lease downtown, at a record – for the area — $1,000 per square foot!)

Space Ninety 8, a new concept from Urban Outfitters that focuses on new designers and artisans, is being introduced in Williamsburg, Brooklyn. And other brands are expanding, including Porsche Design relocating to a store triple its original size on Madison Avenue.

E-tailers continue to become multichannel retailers. LXR & Co., which offers vintage clothing and bags on line, has made its Soho pop-up permanent.

There’s more to come, particularly as Brookfield Place continues to add designer retail and the World Trade Center retail begins to lease up. Of course we’re all waiting for Nordstrom to make its 2018 debut on West 57th Street, but we’re also hearing some interesting legendary names. Harrods is talking about opening a hotel in New York, and many speculate that a shop could follow. I doubt it would be anything on the scale of the London store – we just don’t have entire city blocks for it – but it would be a welcome addition.

Others are talking about Neiman Marcus possibly coming to Hudson Yards (though to be fair, Hudson Yards has been the rumored site for just about everything.) Though it’s located in the metropolitan area in Short Hills, N.J., and White Plains, N.Y., Dallas’ go-to store for luxury has avoided Manhattan and competing with sister store Bergdorf Goodman. We’ll see if they’ve chosen to make the leap.

And that’s just recent activity, largely in Manhattan. More leasing continues in the Bronx with the opening later this year of The Mall at Bay Plaza, anchored by Macy’s and JC Penney, and offering the mid-price point retailer. Value will come to the city when Empire Outlets begins construction. Brooklyn is so busy that it deserves its own story. Retail in the city clearly has never been more vibrant.

— Faith Hope Consolo is chairman of New York-based Douglas Elliman’s Retail Group, which is involved in nearly every facet of the retail landscape, including leasing, investment sales and consulting for properties on or in Madison Avenue, Rodeo Drive, urban retail corridors worldwide, regional shopping malls and luxury specialty centers. 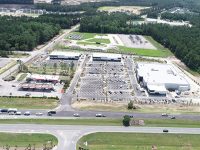 MarketStreet Lynnfield to Add Tenants in 2014 and 2015

Lynnfield, Mass. – The development is anchored by Whole Foods Market and Kings.