Set to come on line in March 2023, The Commons will house a 4,000-square-foot restaurant occupied by brunch eatery Ruby Slipper, as well as other concepts that have not yet been announced. The project includes the demolition of the existing structure at 4236 Veterans Blvd.

In addition to The Commons, projects underway at Clearview City Center include Target’s renovation of its 160,000-square-foot store; Ochsner Health’s new Super Clinic set to open in October; and The Metro at Clearview, a five-story apartment community set for completion in October 2023.

Other uses at Clearview City Center include a new branch of Regions Bank, Bed Bath & Beyond and Walk On’s Sports Bistreaux, among other stores and restaurants. Kirsten Early of SRSA Commercial Real Estate is handling the leasing assignment on behalf of the Richards family, which has owned the site since 1968. 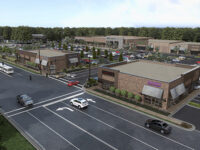