Honolulu — Salem Partners, a commercial real estate developer based in Los Angeles, is moving forward on its $750 million, two-tower project in Honolulu.

The Honolulu City Council recently gave Salem Partners approval to build the 450-unit condominium and hotel development, which is part of Honolulu’s Ala Moana Transit Oriented Development Plan. The first development in the plan is Salem Partner’s Mana’olana Place project, which is slated to break ground across from the Hawaii Convention Center in the second quarter of 2018. A new Mandarin Oriental Hotel will anchor the development.

“We have enthusiastically embraced the city’s new TOD plan and look forward to the completion of the transit system in 2022,” says James Ratkovich of Salem Partners.

Salem Partners received a special transit permit to build up to 400 feet high instead of the 250 feet previously allowed. The developer has also proposed for 78 affordable apartments to be built in collaboration with EAH Housing at the site, which spans 1.42 acres at 1500 Kapiolani Ave.

Colorado-based architect [au] workshop designed the two towers, one at 400 feet and the other at 350 feet. The buildings will be connected via a bridge 35 stories high, and the bridge will feature an infinity edge pool and entertainment areas. The ground level of both towers will include retail space and restaurants, as well as gardens and plazas.

Recently Salem Partners sold the flagship Walgreens building near the development but retained the adjacent parking structure. The plan is to build five floors of affordable apartments atop the parking structure.

Salem Partners’ two projects will result in more than $1.6 billion in new investments in Honolulu over the next five years, according to the company. A timeline for construction was not given at this time.

Joint Venture to Break Ground on Next Phase of 750,000-Square-Foot Shopping Center in Hawaii February 1, 2018 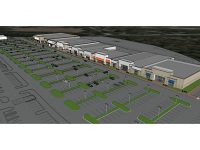