Chicago — Tucker Development was represented in-house on both transactions by director of leasing Andrew White.

Tucker Development has signed two new lease signings with Sprint Corporation and Great Clips for its Chicago-area portfolio. The new tenants will be located in Tucker’s downtown Chicago and Huntley, Illinois, properties, respectively. Sprint signed a lease on approximately 1,500 square feet of retail space in Tucker’s South Loop Marketplace in downtown Chicago. The 125,000-square-foot shopping center boasts onsite parking, serves an estimated 350,000 people that are located within a three-mile radius, and has tenants that include Jewel-Osco, Walgreen’s, FedEx and ATI Physical Therapy.

Great Clips signed a 10-year, 1,000 square-foot lease at the Huntley Grove Shopping Center. The salon was attracted to the 350,000-square-foot shopping center because of tenants including a Wal-Mart Supercenter, McDonald’s and AutoZone. Tucker Development was represented in-house on both transactions by director of leasing Andrew White. Sprint was represented by Peter Caruso, vice president of Jones Lang LaSalle. 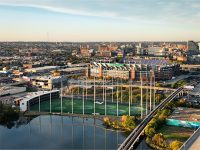 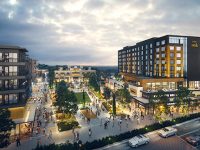 Chicago — The project, which opened Thursday, is 95 percent leased.