Source: Brian NicholsonMeridian, Idaho — The Village at Meridian, a $300 million retail and entertainment complex developed by CenterCal Properties, has opened. The more than 1 million-square-foot project is situated on approximately 80 acres at the corner of Eagle and Fairview roads in Meridian, a suburb of Boise. The Village at Meridian includes a 15-plex theater, 65,000-square-foot bowling/entertainment center, 35,000-square-foot fitness center. At the heart of the project is an outdoor plaza that feature a Bellagio-style fountain.

“This fountain is the centerpiece of the entire Village at Meridian and we can’t wait to finally put it on display,” says Hugh Crawford, general manager of The Village at Meridian. “We are lucky to have one of the country’s premier waterscape designers working to bring this incredible experience to Meridian.”

The fountain features 67 animated vertical jets, 201 LED computer controlled lights and programming that enables the nozzles and lights to be choreographed to a dynamic water ballet or rock concert.

The Village at Meridian was developed in two phases. The North Phase opened in the fall of 2012 and includes retailers Marshall’s, Gordman’s, Gap Factory Store and Chipotle. An additional 600,000 square feet of retail was added during the second phase, along with 150,000 square feet of Class A office space. The Russell Corp. served as the general contractor on the project. 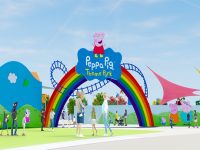 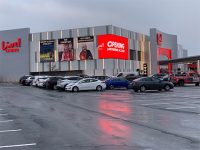 Rockville, Md. — The JBG Cos. has begun construction on the first phase of the $6 million project.

Roswell, Ga. – The coffee retailer will anchor a new outparcel building located at the corner entrance of Connexion at Holcomb Bridge.

Tampa, Fla. — Taubman will contine to lease and manage the center, which is near the Tampa International Airport and contains 200 specialty stores and several restaurants.

Burger King to Buy Tim Hortons for $11.4B

Oakville, Ontario and Miami – The combined company will have more than 18,000 restaurants in 100 countries, and approximately $23 billion in annual sales.