Understanding the difference between older, larger shopping centers and newer properties is the key to making smart investments.

Shopping centers burst onto the scene in the 1920s as natural additions to bustling community centers and quickly grew to embody American retail culture. More than 16,400 centers popped-up in the U.S. by 1975, transitioning from a collection of small local shops to huge retail destinations. Developers embraced the bigger is better mantra, linking increased center size with skyrocketing sales and expanding properties to full capacity.

But all good things must come to an end. In the 1990s, mega-center sales dwindled, eventually leading to slow deaths nationwide. While old centers struggled to stay afloat, streamlined designs emerged to take the place of their predecessors, giving rise to smaller, highly visible centers.

Today, the shopping center landscape consists of both the older, larger centers and the newer, smaller properties. For investors and appraisers alike, understanding the differences between the two — from visibility to vacancy rates — is key to making smart investments.

The biggest factor driving shopping center revenue is visibility. Shopping center visibility influences the amount of vehicle and pedestrian traffic stores receive. Visibility can extend sales for tenants while also increasing rent rates for landlords, a win-win for all parties.

Developers of older shopping centers failed to capitalize on visibility, limiting customer traffic. The shopping centers of the 1970s and 80s, which often contained two large anchor stores (typically a department store or grocery store) and multiple midlevel retailers, positioned themselves between 400 and 500 feet from a highway, far out of sight of passing traffic. Developers took note of past missteps and, starting in the 1990s, pushed their store fronts as close to the street as possible in attempt to retain 85 percent visibility with relation to the street to draw more customers.

Investors interested in a shopping center would be wise to note not only its proximity to the street, but also its configuration and how that impacts visibility. In L-shaped shopping centers, for example, the stores located on the end caps tend to sit closer to the road and retain high visibility, but elbow positions with lower visibility will suffer.

In an optimal center configuration, big box destination tenants such as Walmart or Target, which draw traffic regardless of visibility, would yield end caps to smaller retailers to draw in more pedestrian and vehicular traffic across all stores.

How shopping center visibility is linked to vacancy rates

Americans no longer live in the shopping center heyday of the 1970s, yet remnants of the past still remain. The intermixed shopping center landscape offers investors a plethora of properties to add to their portfolios, yet they must be wary if they plan to see a return on their investment. When purchasing an older shopping center, it’s crucial that investors choose an appraiser who’s well versed in shopping center valuation. With proper upfront research, investors can ensure they pay a fair market price and maximize their return on investment.

— Eugene Szkilnyk is a senior analyst in the Detroit office of Integra Realty, an independent commercial real estate valuation and consulting firm. Throughout more than 15 years in the real estate industry, he’s been active in the preparation of commercial appraisals, market analyses, absorption studies, demographic analyses and valuations on various properties. 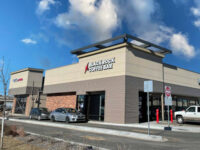 Fresno, Calif. — The Target-anchored Marketplace at El Paseo will open in May 2014.

Phoenix — The new company will operate under the Spirit Realty Capital brand name.

GLENDALE, Calif. — The mall that opened in 1976 includes the first three-story Target in the United States.